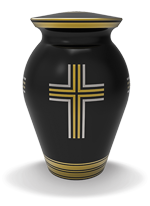 Choose from a variety of remembrance options

We have dedicated spaces within each of our cemeteries specifically for cremated remains and we encourage you to explore all of the options we have to offer.

What Catholics Should Know About Cremation 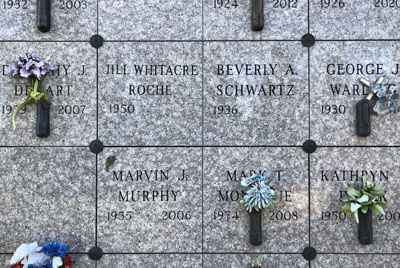 Each single niche holds one cremation urn. These are located in a columbarium or mausoleum. 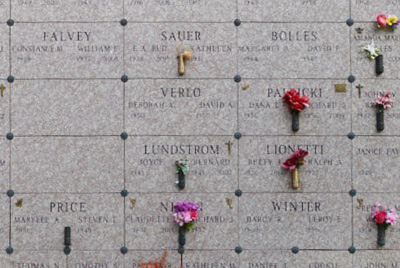 Each companion niche holds two cremation urns and are available in side by side or tandem configurations. 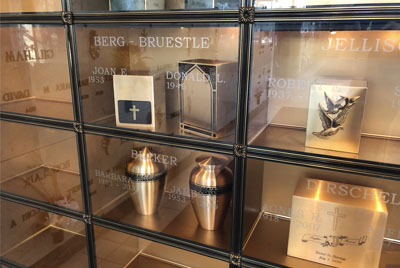 These glass niches at the Chapel Mausoleum at Gethsemane have glass fronts and are available for single urn or companion urns. 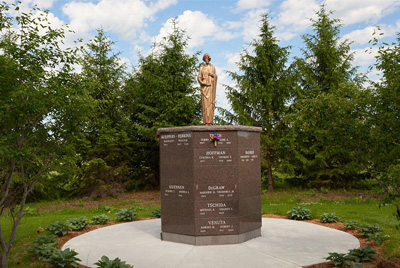 A columbarium is a free standing bank of niches used solely for cremated remains. 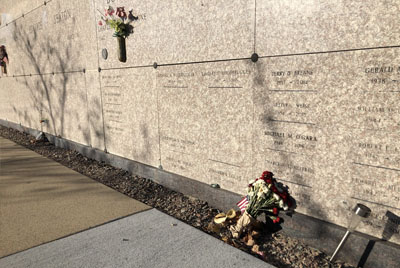 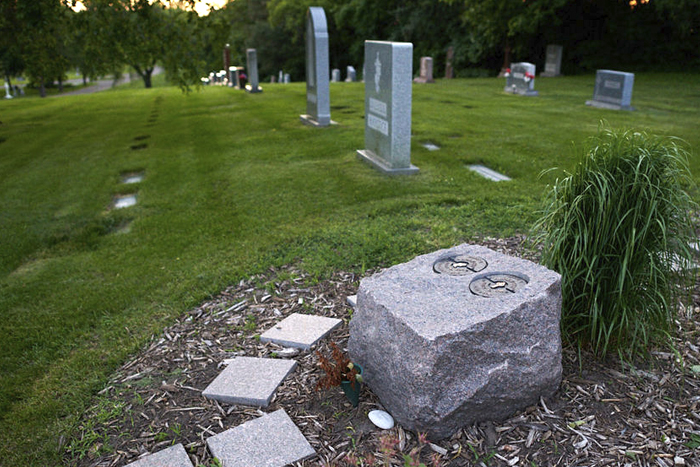 Cremation Boulders are large granite boulders placed under trees in wooded areas of the cemeteries. Urns holding the cremated remains are placed inside cylinders that have been drilled into the granite. Inscribed bronze rings provide memorialization. 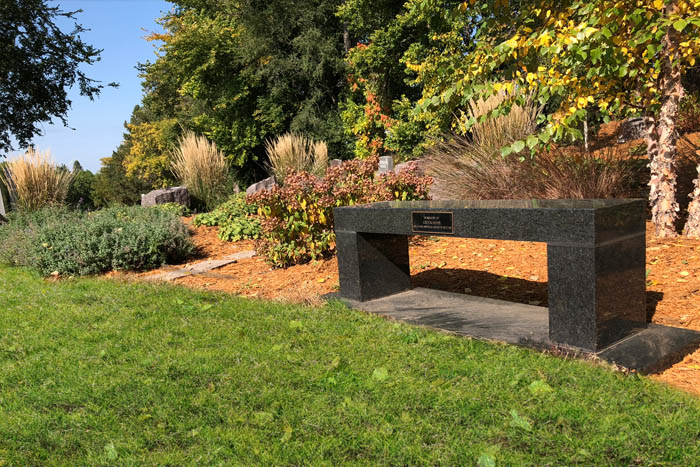 Cremation Benches, in which the urn of cremated remains are sealed within the base of the bench, are an alternate option for monument lots or estate lots and may be memorialized.

The Garden of Gethsemane is a beautifully landscaped special section devoted entirely to cremation burial options, offering a unique place for gathering, reflection, and prayer. The theme of the Garden is the Five Sorrowful Mysteries associated with the recitation of the rosary. The focal point is a life-size, bronze statue of Jesus kneeling in the Garden of Gethsemane.

Cremation burial options in the Garden include:

These are private family cremation areas located within the Garden of Gethsemane, allowing for up to eight cremation burials, six in the ground and two in a granite bench. A family monument is required to be purchased.

These single or companion cremation burials are in pre-installed cremation burial vaults in the ground behind the wall. Memorialization is provided by a bronze plaque affixed to the top surface of the wall. 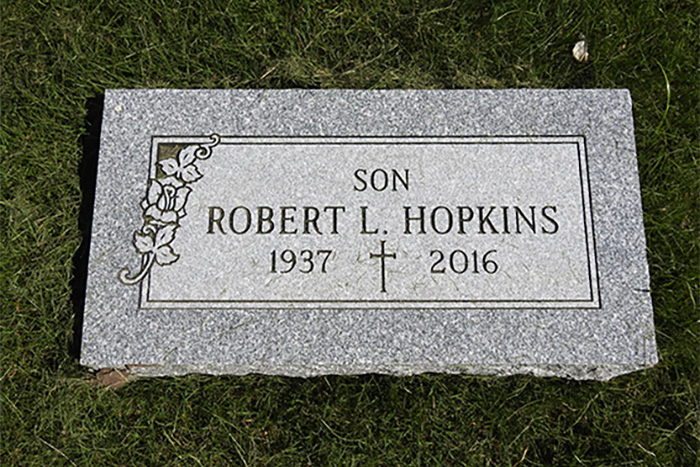 Cremation graves are for single cremation burials and allow for a flush marker memorialization. Additional Right of Burial allows for cremated remains to be buried in the same grave or mausoleum crypt with the appropriate fee paid. Written permission by the owner of the grave or crypt is required. The Catholic Cemeteries allows up to two burials in one grave or one crypt — either one full-body burial and one cremation burial, or two cremation burials.

Family columbariums are available in sizes that can hold the cremated remains of two or more persons. The columbarium can serve as a family monument with the family name engraved at the top. Available for placement on a monument lot in lieu of a monument, or on an estate lot.

The Ossuary at Resurrection Cemetery

The Catholic Church teaches that the body, in any form, is to be respected and honored, deserving of a place that is permanent and can be memorialized. To honor that and to help those who are looking at less expensive burial options, we have begun using ossuaries within certain columbariums.

The Catholic Church instructs that cremated remains are not to be co-mingled (combined). By placing the remains in individual bags, this will not occur. The cost will be less expensive than any other way of interment. The name of the individual with birth and death dates will be engraved on the center band of the ossuary.

This is a very good, cost-effective option for those who wish to have a permanent place for their loved one that includes memorialization. 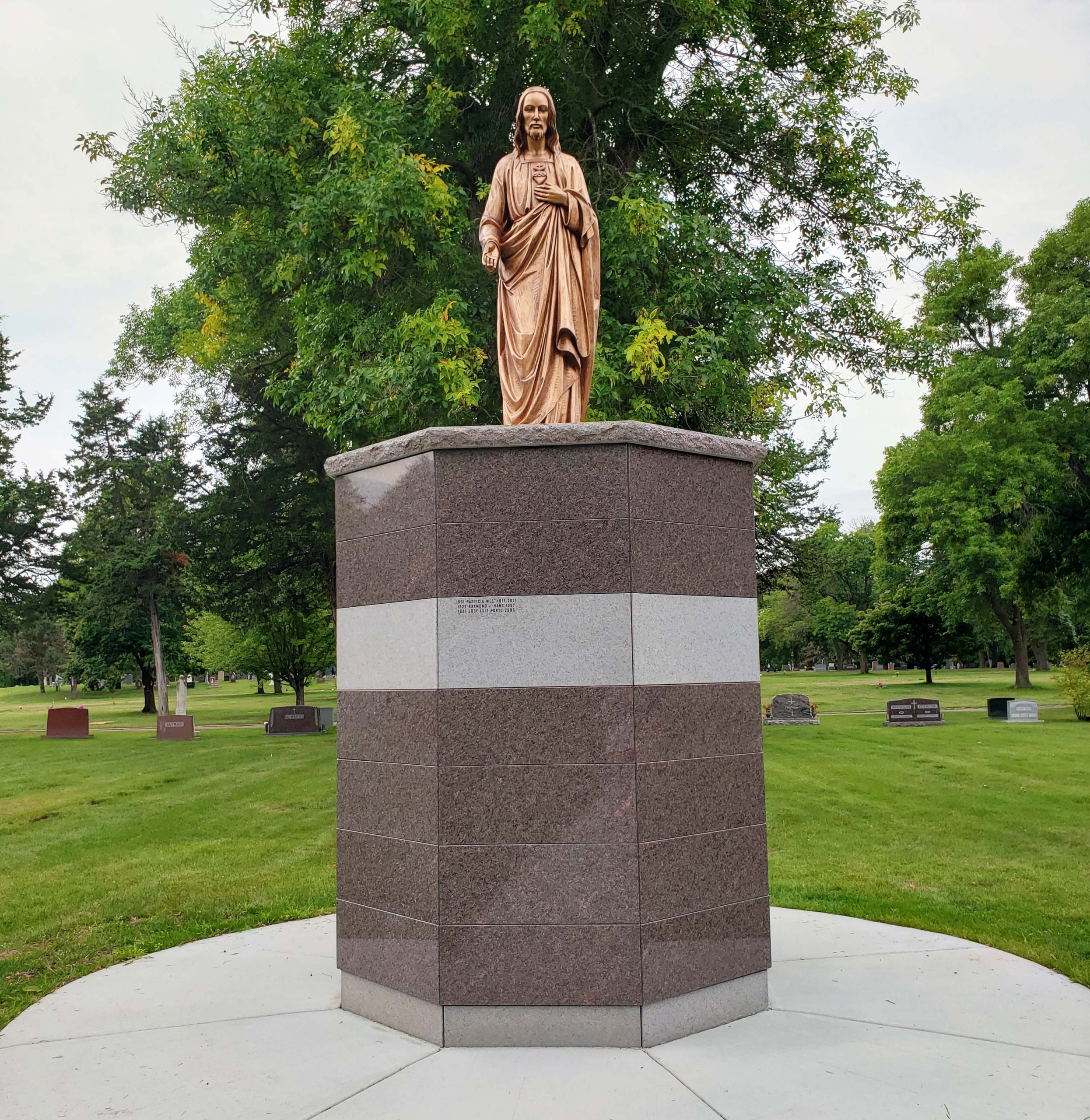 without a Funeral Director

If you are scheduling the burial of a loved one at one of our cemeteries, we are glad to assist you. To learn more about this process, please click on the button to the right. This document is a step-by-step guideline for you as you make these arrangements. Please call the respective cemetery office and they will be happy to assist you. 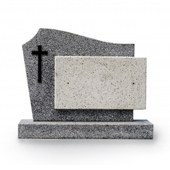 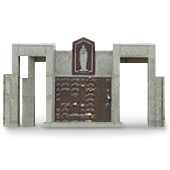 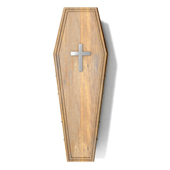 What Catholics should know about cremation 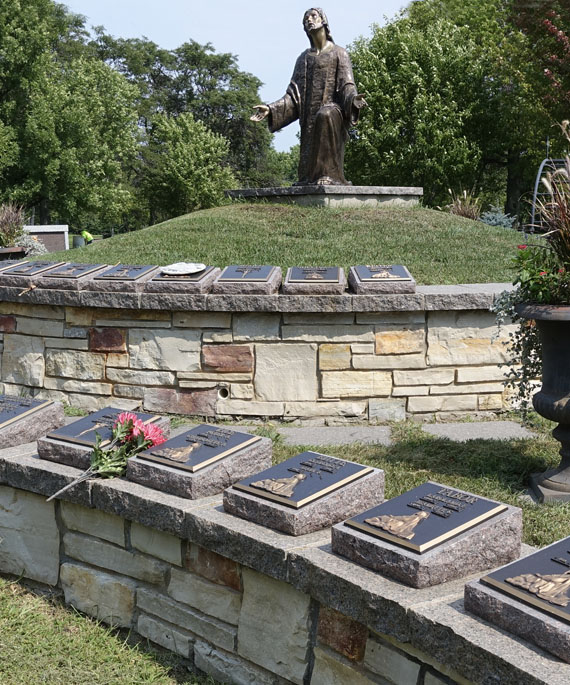 How should a Catholic plan for cremation?

First, discuss your questions with a knowledgeable pastor or parish staff person, or contact The Catholic Cemeteries for more information.

Second, if your decision is to be cremated, make your wishes known in your will or in documents designed to help plan your funeral and burial. Provide copies of these documents to family members, your pastor, funeral home, or Catholic cemetery.

Lastly, as you plan, keep in mind the therapeutic value to your family of celebrating the full funeral liturgy with the body present.

Think of cremation of the body and committal of the remains as the conclusion of a funeral with the body.

What happens in the cremation process?

Cremation is the process of reducing the human body to calcium fragments by means of high intensity heat, approximately 1,800° F , for a period of two to three hours. The process takes place at a licensed crematorium. Properly executed cremation documents are required by the state of Minnesota. Once the cremation is performed, state law regarding final disposition of the body has been satisfied. However, following the completion of the cremation process, Catholics must inter the cremated remains in a cemetery, preferably a Catholic cemetery.

When should cremation take place?

The Church prefers that cremation take place after the full funeral liturgy with the body. Sometimes, however, it is not possible for the body to be present for the funeral liturgy. When extraordinary circumstances make the cremation of the body the only feasible choice, pastoral sensitivity must be exercised by all who minister to the family of the deceased.

Does cremation require embalming, or a casket?

In situations where the body cannot be present for the funeral liturgy, a casket would not be necessary nor would the body need to be embalmed. However, the crematorium requires that the body be placed in a combustible, outer container prior to entry into the cremation chamber.

What is a proper container for cremated remains?

After cremation of the body occurs, the cremated remains must be placed in an appropriate container. An appropriate container need not be expensive. The crematorium usually returns the cremated remains in a cardboard or plastic container; this meets minimum requirements for inurnment in the cemetery. Classic urns, made of metal, bronze, or wood, can also be purchased from the cemetery or the funeral home. Other worthy vessels, made of suitable and respectful material, already in a family’s possession may also be used.

What are the funeral liturgy options pertaining to the Order of Christian Funerals?

Presence of the body at the funeral liturgy:

The Church prefers and urges that the body of the deceased be present for the vigil and the Funeral Mass, since the presence of the body better expresses the values which the Church affirms in these rites. In this scenario, following the funeral liturgy at the parish church, the family may find it consoling and meaningful to go in procession to the crematorium and be present for the placement of the body into the cremation chamber. In any case, after the cremation is completed, the family should gather later for the Rite of Committal at the cemetery.

Presence of the cremated remains of the body at the funeral liturgy:

In accord with the indult granted by Rome to the bishops of the United States, all the rites of the Order of Christian Funerals can be celebrated in the presence of the cremated remains. The cremated remains should be contained in an appropriate vessel and treated with the respect and dignity accorded to the body, including the respectful transportation and handling of the cremated remains to and from the church. A small table or stand is to be prepared for the container at the place normally occupied by a casket. The container may be carried in during the entrance procession or it may be placed on a table or stand before the liturgy begins. Holy water and incense may be used to reverence the cremated remains and the Easter candle will be burning nearby; however, the pall is not used. Photos and other mementos may be used at the vigil but are not appropriate for the Mass. The rite of committal is celebrated at the cemetery as soon as possible following the funeral liturgy. The cremated remains, like the body, are always laid to rest with solemnity and dignity.

No body or cremated remains of the body present at the funeral liturgy:

In those pastoral situations when cremation and committal take place before the funeral liturgy, a vigil prayer, visitation, and rite of committal may occur before the funeral liturgy. The funeral mass is celebrated as indicated in the Order of Christian Funerals. Prayers which do not make reference to the honoring or burying of the body of the deceased are chosen instead of those having those themes. Families are encouraged to gather together for a meal after mass has concluded.

What does a Catholic do with cremated remains after the funeral?

The Church requires that the cremated remains be either buried in the ground in a cemetery or placed in a mausoleum or columbarium, preferably in a Catholic cemetery.

The Church recommends that the place of burial or entombment be permanently memorialized with a traditional memorial stone, crypt/niche front, or bronze plaque, minimally marking the name and dates of birth and death of the deceased person.

What burial or inurnment options are available?

There are two primary options for the final disposition of cremated remains in a cemetery: in-ground burial or above-ground inurnment.

…can be buried in a full size grave.

…can be buried in a smaller size cremation grave located in areas designated only for cremation burial.

…can be buried on top of an existing grave occupied by another person, provided permission is given by the lot owner and observance of the cemetery’s rules for memorialization are followed.

…may be inurned in a crypt or niche located in a mausoleumbuilding.

…may be inurned in a columbarium facility which may be a free-standing bank of niches located in the cemetery or attached to a building in the cemetery.

…may be inurned in other above-ground options in the cemetery such as cremation rocks, private family columbarium, cremation benches, or inside of granite memorials.